A new issue of the magazine has been published

A new issue of the annual scientific journal «Theological Bulletin of the Smolensk Orthodox Spiritual Seminary» # 1 (6) 2020 has been published. The journal is a scientific publication of the Smolensk Orthodox Spiritual Seminary. It is included in the scientific base «Russian Science Citation Index» and in the Church-wide list of journals in which it is recommended to publish the research results of applicants for academic degrees in theology and church history.

Metropolitan Isidor of Smolensk and Dorogobuzh (Tupikin R.V.) Historiography of the question of the influence of the canon law of the Russian Orthodox Church on secular law.

Hegumen Tarasiy (Lange) (Lange Y.I.) Solution of the question of calling to the priestly ministry in Russian pastorology.

Priest Oleg Rebizov (Rebizov OG) Jerusalem at the end of the 10th-beginning of the 6th centuries. BC. in the context of the history and culture of the Ancient Near East.

Archpriest Georgy Urbanovich (Urbanovich Yu.Ya.) Features of the administrative, economic and religious organization of policies in the Hellenistic period.

Priest Dmitry Gamilovsky (Gamilovsky D.M.) The attitude of the state authorities to the Old Believers in the period 1861-1905. on the territory of the Smolensk province.

Priest George Bezik (Bezik GI) Actualization of the “service of the merciful Samaritan” in the feat of the Orthodox military clergy during the First World War.

Priest Elijah Burdukov (Burdukov I.V.) The Institute of Commissioners of the Council for the Affairs of the Russian Orthodox Church in the works of Russian researchers: themes, assessments, prospects.

Poltoratskaya N.L. P.D. Yurkevich on the role of Orthodox spirituality in education.

Urbanovich L.N. The boundaries of professional ethics and personal freedom in teaching disciplines with religious content.

Ilyina A.M. On the study of religious vocabulary: theoretical and practical aspects.

Starodvortseva N.P., Nagornaya A.G., Kulikova M.G. Solving the problems of higher education in the course of the implementation of a youth grant project of spiritual orientation. 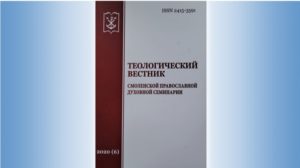